From my previous posts, you'll know I'm no great fan of how Santander treat their clients.  Now people approach me with their own tales of woe ...

Here's one scenario (skip to next para if you don't want to bother with the details):  A couple were on low income at the previous anniversary of their mortgage contract but Santander still offered them a fixed 2 year term at a very reasonable 2.99%.  They subsequently fell into some arrears, but had 50% equity in their home and were allowed to enter into an arrangement to repay these at £20 mth above their monthly repayment.  However, at the next anniversary last October - having set a precedent under the same circumstances (borrowers were still on low income) and already aware that the family could only afford an extra £20 mth - Santander instead hit them with the Standard Variable Rate (see earlier post) of 4.74%, increasing the repayment by over £330 mth.  The base rate of 0.5% had not moved an iota during this time.

I suppose it's like all aspects of life - once you're deemed to constitute a risk, they'll screw you even further.  "Can't afford the electricity bill?  We'll remove your tariff options and you can pre-pay on this key instead - at a higher cost per unit, of course".  Except in this instance, Santander only focused on one part of the lending criteria - capacity to repay - and completely disregarded the other main determination of adequate security.  With 50% equity, where was the risk that the debt would go toxic any time soon?  They also called the anniversary "new lending" and, besides, they knew the clients were in no position to qualify for a loan elsewhere so they had them over a barrel.

So, the likes of Santander exacerbate the plight of struggling borrowers by penalising them, while they and others in the industry keep reassuring us with soundbites like "working with borrowers to help them overcome their situation", promising to "explore all possible ways of preventing repossession of your home".  And the Council of Mortgage Lender's guidance is to "continue to exercise forebearance where it is fair to do so for the borrower" and that this "does not translate into an immediate possession risk".

The Financial Conduct Authority (previously "FSA") requires financial institutions to adhere to principles of "Treating Customers Fairly" yet, when the above case was escalated to the Ombudsman, the reply proved beyond doubt that once again the regulators are utterly toothless.  Santander were not required to disclose their reasons for applying the higher rate because their "lending criteria is commercially sensitive" - in other words, the industry has closed ranks as usual.  And here was the real classic extract: "A lender must be responsible in relation to the concessions it grants when dealing with consumers suffering with financial difficulties, ensuring the situation is not purely being deferred to a further time in future, ultimately making the situation worse".  It would be funny if it wasn't so tragically ironic.  Hello?  Who is making the situation worse by upping the repayments by, in this instance, 60% (the arrears/loan ratio was barely a quarter of a percent)?  And it took five months for the Ombudsman to reach their conclusions, by which time the couple could have had their home repossessed.  Would any regular person in the street (the ones the FCA is there to protect) consider the above outcome to be "fair"?  I appreciate it's a subjective term, but come on ... you can only stretch semantics so far.

Another twist in the tail - at the previous lower repayment, the arrears represented three months payments and it went to litigation (a whisker away from repossession).  But, at the higher repayment, the arrears represented only a little over a month.  Same people, same arrears/loan ratio, but suddenly within the tolerance of Santander's Collections Department.  Lies, damn lies & statistics.

And the biggest irony of all?  The banks got the economy in this mess in the first place and, having therefore been partly responsible for the borrowers being unable to find work in a depressed job market, inflict even more pain on them by coming back for a double-dip into their pockets.

Homes will be lost, placing an even greater burden on a society already struggling to provide social housing and, stupidly, the banks seem oblivious to the fact that they're only shooting themselves in the foot by terminating loans they could have been acquiring interest on when they're finding it hard enough to get rid of the stuff. 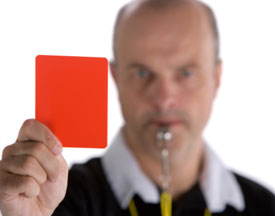 Treating Customers Fairly?  Not likely, while our self-serving banks have no sense of social responsibility.
Posted by Roy Robart at 17:05